In the Eye of Terror

Time for another OWC painting challenge entry. This months theme was "It's Dark in Here..." meaning that anything which can be found in a subterranean environment can be entered. It's like 75% (if not more) of the OW range that could be entered, and still I found it hard to decide which miniature I should do. After the bonus challenge, I really wanted to come back painting Pickford. So bottom line - it was to decide between Goblins or one of the aweful big Eye's :-s


The Eyes are - again - a multi part white metal miniature from Otherworld Miniatures - and an absolute nightmare drilling, pinning and glueing all together. Took me like a day getting the Eye of Terror I ready for priming, so I could actually start paint the thing. You can find a picture of the kit in the new John Pickford Wiki - found here.

I went for the Labyrinth Lord Eye of Terror look, as I think it's even more awesome that the classic D&D Beholder version it can also be assembled as.

An Eye of Terror is a 5' floating Orb with a central eye, eight eyestalks and a large serrated mouth. The monster have hundreds of small tentacles hang from the bottom of its body - but also have two 3' long tentacle arms ending in a spiked squid-like sucker appendage that can grasp like a hand.

The monster has  many similarities to a classic D&D Beholder with it's 10 eyestalks, but the Eye have only 8 but then it has those beautiful sculpted squid-arms. Luckily, John didn't do all hundred tentacles (- as he only did 8 of them) - as they were a true nightmare putting on.

Otherworld Miniatures- DM23a-Eye of Terror I 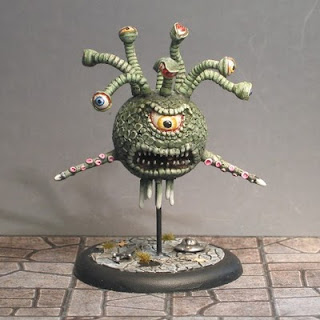 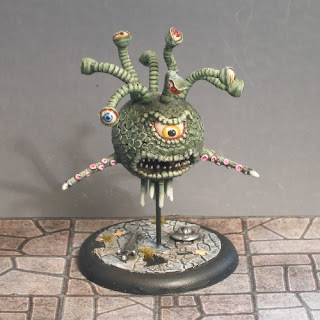 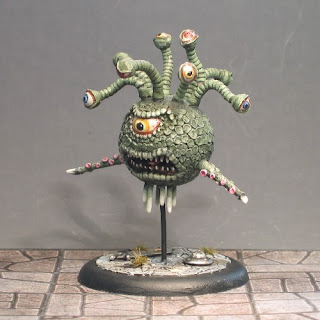 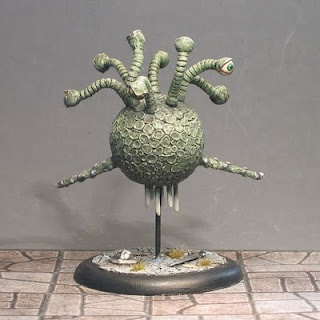 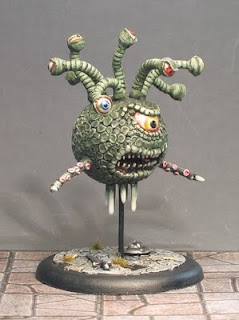 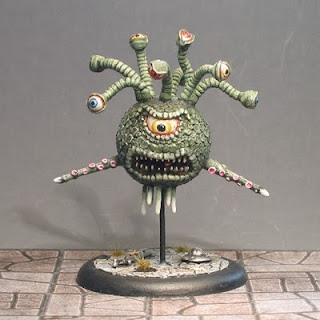 Certainly a beautiful sculpt. John really outdid himself creating this fantastic classic monster - stayed "old school" but also gave it a nice modern twist. Painting wise?? It was fun painting - but it's big, and heavy, and big - and I can assure you, that I'm not painting scales in a very long time. So don't expect seeing Eye of Terror II and the Eye of the deep anytime soon.

And as the month is nearly over and haven't really painted much else, I'm about to enter this miniature into the Brush Slave Challenge at CDO as well :-) Theme here is: "A face only a mother could love" - so unless a Eye's don't have mothers, I think this one qualifies for the Brush Slave, too ;-)
Posted by CLAM at 12:45 PM