Finally, they are here :-) White Knight has just announced the release of the next batch of the John Pickford renaissance dwarves - and this time it's a massive one.

The 2nd set of core Infantry. Comes with 8 dwarfs in a set. 2 x 4 different bodies and 8 unique heads. The dwarfs are in an attention pose and can be armed with the choice of 5 different weapon: Pikes/spears, Helberds/Poleaxes, Swords and Buckler, Handguns and Crossbows.

Also released are the 3th infantry set. These are in a front rank/action pose. These are one piece casts with plug in weapons - and again you have 5 different option: Pikes/spears, Helberds/Poleaxes, Swords and Buckler, Handguns and Crossbows.

Furthermore 3 civilians are out as well. 3 female dwarfs to chose from. A set of 2 Maids and a dwarf Floozie.

Here's a small teaser from Blue's Maraudering Miniatures. Talented Mr. Blue was that privileged and got himself a few masters he could paint for Mr. White. And he did one hell of a job, if you ask me :-)

And here's a preview of the naked metals form the 2nd core infantry set armed with Crossbows (WKD-02E) - my personal favourite. 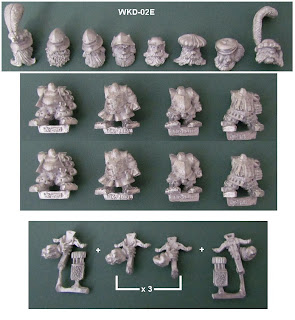 - but go check them all out at: White Knight's Miniature Imperium
Posted by CLAM at 5:07 PM