Once again I have been gifted with one of these "event-exclusive" pieces John is rather well-known for.

This one is another piece for the people at talkfantasyfootball.org. Last year, "Axiom" did a little fantasy-football for the participants in The Legasy Team. This year, he went for something much bigger :)

The Legacy Team is a painting event that have been running for more than 10 years, now. Each participant paints up a race specific miniature and then a lottery is held to draw a winner who gets the team. The race for the 2013 Team was "Halflings" - so what better excuse could he get for having John doing him a Halfling Chef. And didn't stop there - no, the little Chef comes with camp fire and a ball on a roasting stick, too :)

Here is the little master piece: 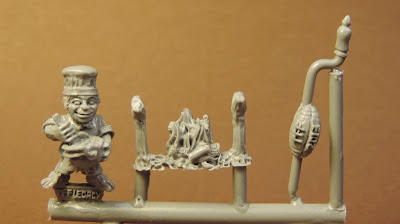 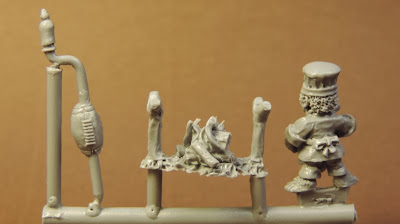 Cast in resin. Limited to 50 casts. Mainly sold to the people taking part in "The 2013 Legacy Team" and other members of talkfantasyfootball.org.

Really like him, and he will go so well with the Foundry Halflings - and '90 Citadels.
Posted by CLAM at 9:22 PM