A few weeks ago Foundry made the announcement of setting up a new website called Casting Room Miniatures. 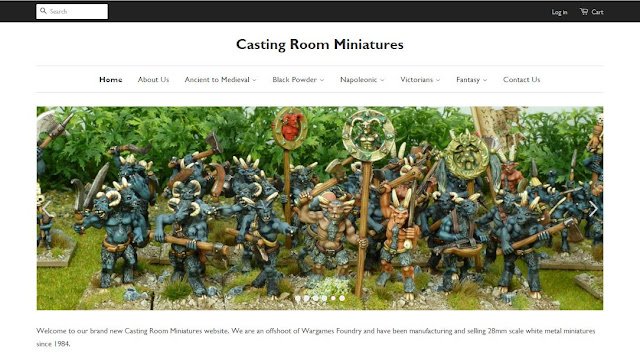 At Casting Room Miniatures you can get all the alternate versions of many of the models from the original Wargames Foundry range alongside with various others and interesting odds and ends.

The alternate versions were made between 2006 and 2012, where Foundry was run by "other hands".
During this period many of the original models were discontinued and replaced with more "modern" sculpts - and also expanded on their fantasy line including the many excellent sculpts made by John Pickford - like the Demons, Goblins, Undead, Halflings and Hill Trolls,


In the Summer 2012, when the Ansell's returned, all the original models (mostly models sculpted by Michael and Alan Perry) re-entered the main Foundry web-site, replacing most of the newer lines. Some of the alternative miniatures moved to a temporary home on the eBay store "Flyte of Fantasy" - others simply "disappeared".

Seems like the many John Pickford fantasy sculpts have finally found a "home".

There are still a few ranges missing (like the Evil Barbarians, the Christmas specials and the rest of the pig faced Orcs) - and who knows, perhaps we'll even see the huge Greater Demon and the mysterious Pig faced Space Orcs: I really hope the will get added, eventually. Fingers crossed.

Check it all out, here at: http://www.castingroomminiatures.com/
Posted by CLAM at 1:28 PM