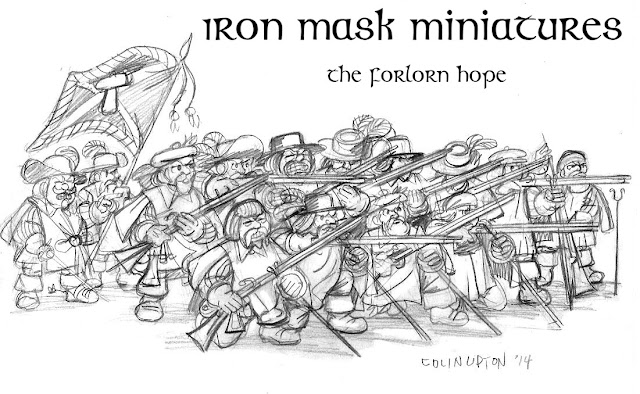 The second Kickstarter I'm to share this week is the third campaign from Gary Price's Iron Mask Miniatures - and is this a big one?

I've given up counting how many new miniatures there is in this one. Gary stats there is over 40 new poses, but like last he has gone crazy on hand/weapon and head options.

Like the other two previous campaigns, this one is also about Dwarf Musketeers, but this time he leading the dwarfs into war. Previously, Gary has aimed the skirmish gamers but this one certainly appeals to the larger/mass battle gamer, too. So it's time to enrol new troops for you Old world Warhammer, Dragon Rampant or Kings of War armies.

This release includes core infantry of musketeers with firelock muskets, halberdiers and pikemen but also command figures and two new Mounted Dwarf Musketeer poses (picket and escort). The focus are one the Firelock Muskets, of course with 7 different packs to chose from (each with the option a 3 different set of heads) and the fantastic Veterans with their sculpt on heads making it possible to give them longer hair and beards.


- and then we can look forward to two new Special Characters - the SC12 Dwarf Senior Officer and SC13 Halfling Drummer. Magnificent sculpts they are ....

The campaign will be running untill November 13th. Already half way through but definitely need more support to succeed and open those wonderful stretched goals. You'll find the campaign here:

https://www.kickstarter.com/projects/ironmaskminiatures/iron-mask-miniatures-forlorn-hope
Posted by CLAM at 1:53 PM