Don't know if it's just me, but after an "intensive" painting project (to my scale) with lots of creative thinking of new colour schemes, contrasting and harmony colours, colour temperature, focal points etc. I fell rather exhausted and it is often ending rather sudden and with a long hiatus from painting to follow. I like the creative process to a certain degree, but rather than finishing I begin to look into new projects with more unified colour schemes or just painting something more historical accurate - just like it happened with the MM90-Painting Countdown ending with painting the Jong-Un and Trump-proxy-figs, in spring 2018. It ended with a long hiatus anyway, but I'll blame the extreme warm summer we had up here for that, though. It wasn't lack of interest in continuing but the climate ruin my paints.

I did a few thing up to Christmas, but I haven't really painted anything, in 2019. Yes, I showed you the Ewal Wizards the other day, but they are actually paintings from around the same time as the Chaos Dwarf Baggage Train. So, not ending up in the same old habit I dug up another historical accurate miniature - or as close as it comes, when you are painting the dwarven Politicos sculpted by Bob Olley (and available from The Little Soldier Company). Cause, I picked up the David Cameron - or more precis, the Underking David, Pursuant of Charm and his Demonic Familiar to paint.


I started looking for some inspirational pictures, as I have never seen Mr. Cameron in anything else but his dark mortician suit. But what a waist of time it was....! Darn, is he the most dull-looking man ever? His seems to be living in that dark suit of his! All I was left with was a choice of doing the tie in blue or purple ....? Certainly not much creative thinking needed here.
So, I could just undercoat it black, paint the skin and give him a white starched shirt - and call it done! - but where's the fun in that?

While researching I came across a resent article about the hole Brexit-thing, though. A coloured article (maybe even fake) about Cameron being responsible for the EU referendum and for starting the havoc, it seemed to have caused ... - I won't get political here, don't you worry about that - but after reading the interview it left me with a picture of a man making puzzle leaving them unsolved and causing havoc because he could - and I had one clear picture in my head: "Riddler", the classic DC Villain who's creating havoc just for the fun of it and don't give a sh**.

And I thought: "why not"? Definitely more fun than doing dark blue (I mean really dark blue *sick*) and would go well with Mr. Jung-Un and Trump. All he needs is his classic derby hat and a cane. Easy fixes - and a green paint job (oh, I just like greens - prefer them so much to blues) :)

And looking at it with those eyes the resemblance is quite clear, right? 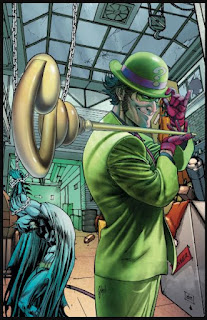 But what about the Party Political pig’s head? Really belong with Mr. C - so I needed a reference to DC for that as well, but the only pig I knew from the DC universe was Professor Pyg - so ... a decapitated Professor it had to become.

And here they are, the two DC villains aka "Riddler and Professor Pyg - or what's left of him" - some might refer to them as: 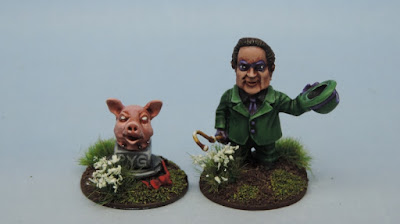 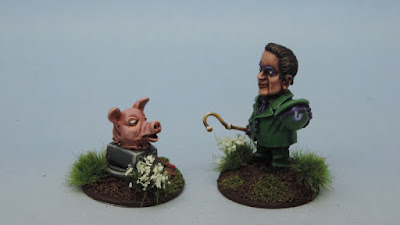 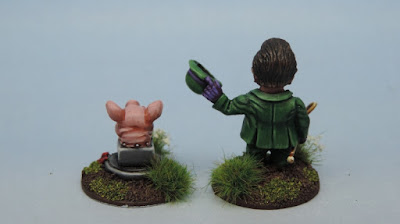 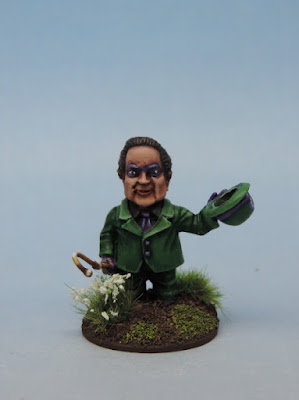 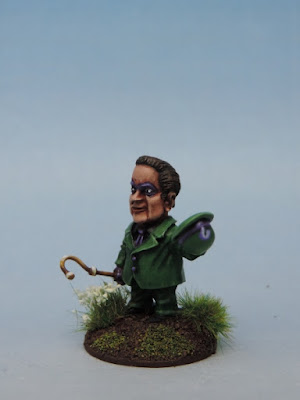 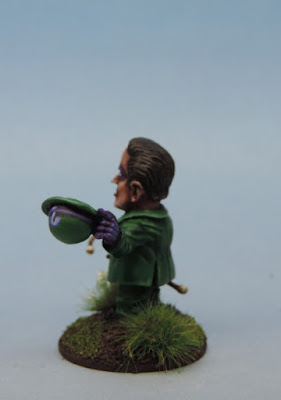 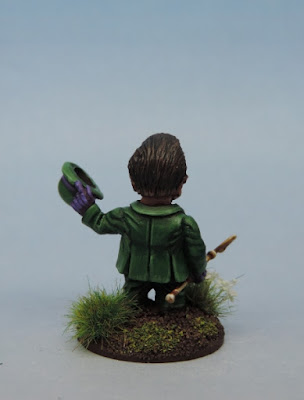 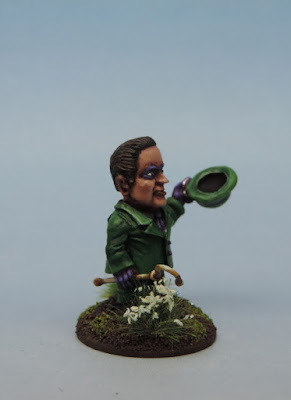 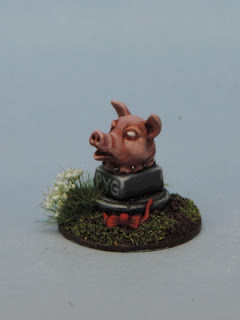 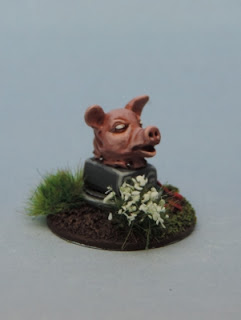 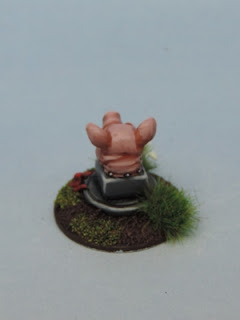