First off, Happy Easter to all. Hope you are enjoying having a few days off.

Not much holiday here as I'm still struggling with my back issues - and awaiting a second scan to decide whether surgery can help me or not. In pain lots of the time and laying down most of the day, but I do find an hour here and there, where I'm actually able to do a bit of painting. And have to say that painting is truly vitamins for my soul.

Just before we're getting started I'd like to welcome a few new followers: zhu bajiee, Colonel Shofer and myincubliss. Glad to see you all here - and hopefully it will be a pleasant stay for you. And should you have any questions feel free asking.

So, with my limited time window, I've been focusing on the various painting challenges I've become so very fond of.

Today's update is about the challenge at the Danish Wargamer Forum: Powerfist.dk.

The theme here was 'The General' and could really be anything - so I decide to show my World of Twilight miniatures a bit of love. I've been a big fan of Mike Thorp's weird fantasy world - and picked up his starters for the Twilight game quite a few years ago. I've kept on adding to the two cultures from the starter pack - the Fubarnii Empire and the Devanu - but never actually painted them. Have started a 100 times, but never been pleased with the result - so all is standing in the cabinet primed and only touched when gaming.

It's been a bit quite around Twilight for a few months now, with not much new added, but Salute 2011 really changed that. Here, Mike gave release to the 2nd rulebook for the game"Of Gods and Demons" (a new rulebook covering the new culture: the Delgon, but also most of the new units for Empire and Devanu and a bunch more scenarios/fluff) - but also gave preview to a hell of lot of new miniatures - and most of them was even made available for pick up at Salute 2010.
I couldn't go at Salute, but Mike gave me the opportunity to pick up a lot of them from direct sales. Later on most of them will become available from Hasslefree Miniatures.

Here are a few samples of the awesome upcoming releases - that should arrive with me shortly:

So to get in the right mood when they show up - the painting challenge was a perfect oppurtunity to try out a colour scheme I saw used on a WfB Empire army a few months back: purple, greys and browns - and I though using on my Fubarnii Empire - starting with the Commander. Did also plan doing a brown skin tone - but like you can see I change me mind. And here he is: 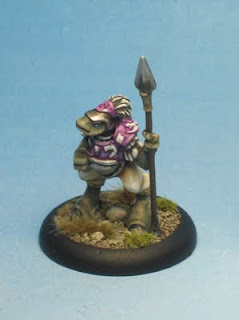 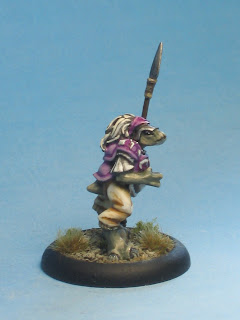 Need a shieled, though - but should arrive with my big WoT purchase, too.
Posted by CLAM at 9:10 PM