Collecting John Pickford: Four A Miniatures is now on Kickstarter

Good friend, Andrew Coleman (owner of Four A Miniatures) is back with some new Pickford sculpts. This time he will be bringing them out through Kickstarter.

Back in 2013 Andy released a set of 4 awesome chaotic dwarfs/dwarf creatures. I picked those up personally in London at Salute 2013 and when visiting, Andy revealed that more was to be made. And it's those pieces that have found there way to Kickstarter, now. 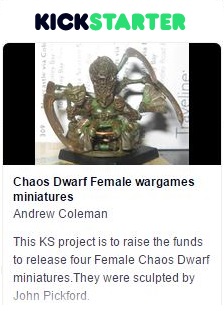 The two new pieces are both an attempt on making female chaotic dwarfs. A delicate subject, as there isn't much material regarding female dwarfs in general, so lots of artistic freedom interpreting. And John really explored the subject and twisted and curled it into two weird, but wonderful, characters.

Here's some shots of the wonderful creations John made for the campaign.

And the other one is the magnificent 17th century styled character, called "Bella"


Like most dwarfs by John, these are multi parted miniatures and both comes in two different versions. A normal one (or as normal as a female fantasy Chaos Dwarf can be) and a gifted/mutated one - and for a merely £20 pledge you can get all 4 version.

I'm really looking forward to this. Fingers crossed, that the campaign will succeed and that the cooperation between John and Andy will continue . and they will keep producing such excellent personalities/characters.