The MM90 countdown - the beginning.

Like most "real" Chaos Dwarfs fanatics,  I considered the Marauder Miniature range of Chaos Dwarfs (the MM90-range) as being the ultimate and most true chaos dwarf line ever made - and they have had a huge influence on my own Ewal Dvergar-range.

Marauder Miniatures was set up by Aly and Trish Morrison back in 1988. Till then, the two had been working with Games Workshop for quite a few years when they decided to set up there own company. Their's lots of rumours why this happened , but like many I was stunned by their art direction and choice of style and how they put distance to the well-known Citadel ranges.

In 1993 the Marauder Miniatures where merge into the Citadel range, but not many of the sculpts survived in the long run, unfortunately - and soon became collectables.

The MM90-range where produced by Marauder Miniatures back in 1988-89 and were all sculpted by Aly Morrison.

Now why is this relevant you might ask, well the answer is rather simple.

Back in the '80s I wasn't allow to buy huge quantities of miniatures by mail order and sending money to an unknown company abroad. For a danish kid back then, it was rather expensive with international money orders, taxes and shipping nor were my parents that supportive, and they were pretty sure it was some kind of scam, cause "what company could make a living from making gaming pieces"? So I could only droll over those awesome pictures and dream of having my own set.

So it wasn't till around 2005/2006 I actually began collecting the Marauder Miniatures and by then they had become rather hard finding - and it took me quite a few years (and a lot of helpful friends) finding and complete collecting a full set.
I achieved it, but I haven't had the guts to paint them. Those of you that have been following my paintings will know, that I've only painted two - the Mage and the crosbowman (but I even gave him a Blunderbuss to hide what he really was).
I'd given it a go quite a few times, but stripped them all again, every time. They are the corner stone in my collection, but I struggle giving them the paint job they deserve.

But now it's time to try again. Good friend Sjoerd Trouwee (yes, the sculptor of the Son's of Siegward ) has re-found his painting mojo and has even started blogging about it - go check it out here @Evil Little Buggers. So we have agreed doing a little "paint of" - challenge and see if we can succeed painting the complete MM90 range - a MM90 painting countdown so to speak.

I've given him a head start, as he is down with 3 - and he has now painted the MM90/5a,c and d. He called the challenge for painting MM90/5d last Thursday (5th April) and posted the finished piece yesterday (9th April) ... pretty sure he has cheated a bit - hasn't you Mr. Sjoerd "Slow Hand" Trouwee? Also unfair calling it, while I'm away, ain't it? Anyway, I better get cracking, right?

And just to prove I'm not a cheater :-P 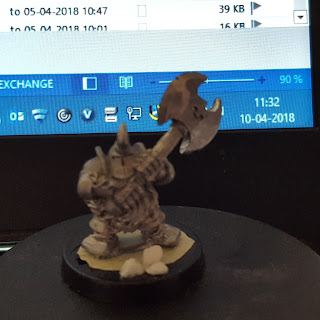 And I'm pretty sure I'll have it painted before his done basing - lol :-P
Posted by CLAM at 11:52 AM