Some of you might remember first batch of of White Knight Miniatures Dwarf Great Swords - or "Zweihänder" as he calls them - that I showed you back in November 2011 - now the good news is, that the second batch is now done and are being mastered as we speak.

WK announced this last Saturday (25th of February) at his blog/store - White Knight Miniature Imperium - and I have to admit, that I'm stunned by the quality of these. Each batch seems to be raising the bar for what can be done within this miniature line without compromising with the original idea, style or scale. Very well done, "Poshdwarf" and WK.

And without any further ado: 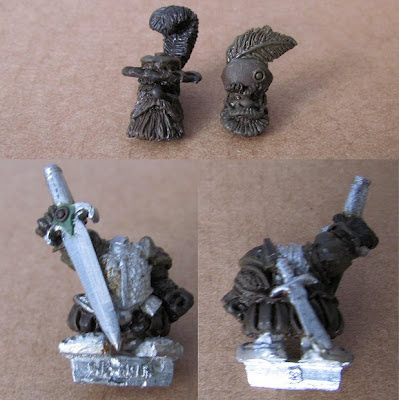 With the previous 2 bodies and 2 heads - you now have 3 bodies and 4 heads to make up your rank and files - now that's the possibility of doing 12 unique fillers - without taking into account that a great number of the existing heads will probably fit these bodies as well.
Standard bearer

And my favourite of them all The flambergé (#4 single piece) 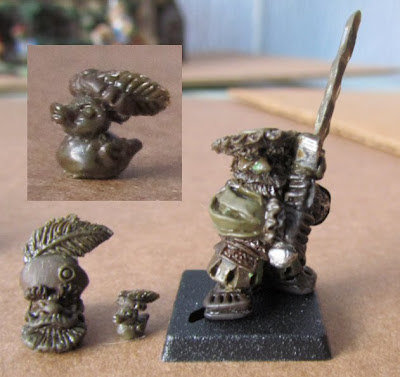 - and with his rubber duck pet :-P
So it looks like, that the first Elite sets will be:

If all goes well, we could expect seeing them already in April.

Last week, I told you of sculpts I knew of, but couldn't tell about/share - and then, a few days after most of what I know was revealed to us all. And what a pleasant surprise it was :-)

Last Friday (the 24th of February) there was an "Open Day" at Wargames Foundry - and man on the spot was Mr. The Dozing Dragon  - miniature forum activist, collector and a great hobbyist - and luckily he noticed all "the new" miniatures in the panting cabinets - including these fantastic Halflings:

Picture shows 10 halflings and a bar, but I think there could be a few more models than those seen here.

The halflings are about 19-20mm to their top of their head, so should go well with most modern Halflings.

All are sculpted to a very high standard and ooze of character. Exactly what you would expect from a "Hobbit" Lovely, lovely work by Mr. Pickford and I am very pleased to see that they are now on their way.

The Halflings were done by John back in late 2009/early 2010 and have been with Foundry's for a few years now. And we'll still have to wait some months before getting our hands on them. The rumour says that they are to be released late 2012 - and might be part of something "bigger" from Wargames Foundry.

Also, on the Open Day, was some of the cool concept artwork that was made for these excellent hobbits, shown - and with the courtesy of The Dozing Dragon I'm allowed to share his pictures of these here, too : 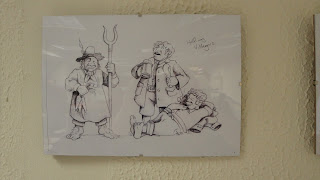 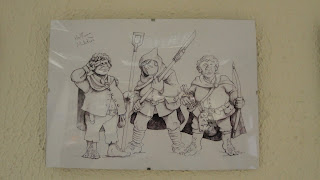 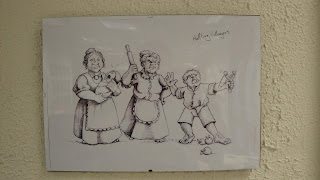 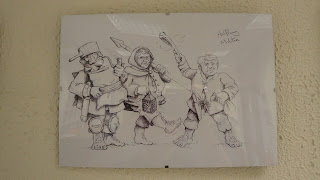 Really nice drawings and nice to see that the sculpts catch the same feel found in the drawings. Often hard transforming two dimensional art work into a 3D sculpt - but I think John did one hell of a job here.

And if you want to read more about the Foundry Open Day (or other interesting stuff from the miniature world) go check out TDD's newly started (or should I rather say re-awoken blog): Dear Tony :-)
Posted by CLAM at 11:00 PM 3 comments:

It's alive - sort off

Yeah, I'm still alive (sort off) but my hobby life has almost died. Winter has been very rough on me, but I hope that a bulk load of new miniatures and the new-founded 2012 Brush Slave (Painting) League at Chaos Dwarfs Online will kick-start my paintings.

While I've been taking it slow the John Pickford-miniature-industry have been working at full speed.

So lots of miniatures have been sculpt, moulded and cast during autumn and winter - and quite a few of the new casts have now been added to my collection of Pickford sculpts.

Sadly I cant share all I have heard/seen as it will break the confidence I have with the sculptor and the miniature manufacturers - nor can I share the greens I've been shown lately. They will have to be kept a secret, for now - but I can tell you, that they are humanoid, stunty and cruel :-P

But not all is new and shiny. Cause a few old Pickford sculpts will now be seeing the light of day, too. Wargames Foundry has announced that their "new" demons will become available this Spring. The sculpts themselves are probably 5 maybe 6 years old now - and only a few pre-cast have been floating around - but now they're coming and  and given an official release.

I'm quite excited to see them out, but to many people they might look old and outdated. Think, they would have had go down well, if they had been released back when they were actually made - but for some unknown reason Foundry seems to be sitting on their greens for a very, very long time before releasing them. And they have more even more Pickford-gems on their dusty shelves ;-)

Of the many new miniatures I've got, we'll have the many new Otherworld's, first. Lot of delays to this batch due to some casting issues apparently, but a few weeks back a big box of OW-blisters arrived at my door step. All the new "toys" (Huge and Giant Spiders and Goblin Wolf Rider Warband) and a small back log of missing Kobolds and Ogres have now arrived - and I'm really looking forward giving them all a good look and documenting them on the Wiki. Perhaps some might even receive some paint, soon.

Next, something very exciting, but also quite rare: The Gaming Cantina's Space Lizard Centaur Bodyguard (see http://clamshellsandseadogs.blogspot.com/2011/11/collection-john-pickford-zoat-for.html) - or shall we just call it a Zoat (for all the Warhammer 40K - Rogue Trader people out here). Showed you the greens back in November, but holding it in your hands makes it even more impressive. An not only is it rare seeing John do a Sci-Fi miniature but with only 50 casts, this will be quite a rare sight on the tabletop, so I'm very proud and pleased to own this copy here:

Resin! Yes, I know. Hate it and will take some time to clean before I can even start glue the pieces together, but I am actually looking forward painting it. Right now I'm trying to sort out how to use him. As you might be aware off Sci-Fi ain't really my genre - but I am thinking of creating a small display/diorama piece combining this with some GW Eldar. Initial idea was to use him with some plastic Eldar Guardians I had laying around - but I can't neglect the significant scale issues:

The heroic act of carrying the casualty soldier loss its meaning if he looks like a kid.So will try a new idea and I am now planning using some Rogue Trader era Eldar's - like Guardians or maybe Fire Dragons,  if I can get my hands on some that is, of course.


Another miniature worth mentioning is the Bugman's Brewery Community Dwarf King. The first batch is now done and have been shipped out to the supporting members.

I also got mine. And I am already working on the first of them. A classic character posed on a small rock, but without use of any of the head gear pieces he came with (he came with 3 sizes of Dragon head visors and some Asterix helmet wings).

So here he is:

Awesome, awesome miniature. Tons of details - and will probably be a nightmare painting - lol.

And with him  also came a small present from Matt (the guy, who has organized the hole thing). The present was some small accessories piece also sculpted by John Pickford - or more precise three barrels :)

Nice pieces and will become very useful - but doubt I'll ever hear anyone ask: "oh, and who sculpted those awesome barrels you have over there" ;) - but thanks, Matt - I'm very, very happy with them.


And before I leave you all, I want to say thanks to all the new followers. I'm very glad to see you all here. Also like to give a special thank you to George Georgiou (G2) - not only is he an inspiring painter (check his blog) and a great and supportive member of the Chaos Dwarf On-line Community, but he also masters the magical photo editing art/software and found the time to help out a friend. G2 have made the new (and more appropriated) banners for my blog and for that, I am very grateful. Thanks George :-)
Posted by CLAM at 3:10 PM 4 comments: