Yes, I'm finally back and today I have a few announcements to make :)

About a year ago, I posted pictures of a certain Sci-fi Lizard Centaur (aka an Eldar bodyguard Zoat) done for the Gaming Cantina ("Exoditejon"/"Axiom"). The miniature was originally a limited edition miniature for an annual Gaming Event held by the Gaming Cantina, but afterwards John has been converting it into a Fantasy Football character.

The FF Zoat version has now been picked up by Impact! Miniatures and cast in metal. The miniature is available from the Impact! Miniatures site - and can be found in their "Pro Player Minis"-section, under the name: Zoat the Bibbisaur.

There aren't any pictures of the finished and painted model on their site, yet! Nor have I got hold of my copy yet, so I can only share the picture that was posted in the "what's at Tom's desk" thread on the Impact! forum - but that's better than nothing, right ;-) 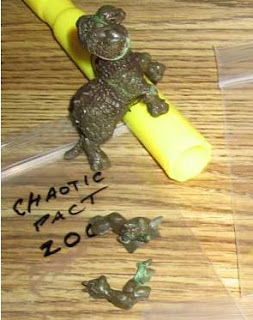 Wonderful version of the Zoat that easily can be converted into a classic fantasy settings, I think.

And will - of course - post pictures of the metal version when it finds me.

The first crowd-funding project involving John Pickford's sculpts has seen the light of day. Would have loved to see his name in the Otherworld Dungeon Adventures-campaign, but that was unfortunately not going to happen.

But then came the Interloper Miniatures project along .......

"Interloper Miniatures - Cast in Ruin" is a campaign to fund a dozen 28mm scaled metal miniatures for use in post-apocalyptic role-playing and tabletop skirmish games. Not really that exciting until you actually see the concept arts for them - as they are certainly one of a kind - and no way they can be called typical (post-apocalyptic) miniatures. The range will consists of ..... Rabbits, Lizardmen, Fowls and bugs/termites - most of them armed with guns :-)

Here is the conceptual art piece from the opening of the campaign - and it gives you a good impression of what you can expect from their campaign:

The project involves quite a few famous sculptors - and in here you'll find names like Bob Olley, Paul Muller and then - of course - John Pickford.

And it can't really come as a surprise that monster specialist John Pickford will be doing the bug-creatures/termites seen here on the right hand site. Certainly the type of miniatures that you would expect to see John do - especially after the many Otherworld Creepy Insectoids/Monsters.

Here is WIPs of one of the three bugs John will be doing: 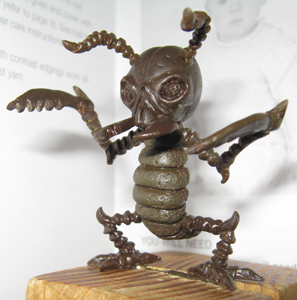 The different campaign-perks will give you set of 3 miniatures from each of the races. And should you like getting the Pickford's - the $15 "Buuuuugs"-perk is the one to aim for.

And while there don't forget to check out the Fowl sculpt - done by Mr. Bob Olley. It's certainly worth a look (and some spare cash), too.