This second one is all about bringing mounted dwarf musketeers to his fantastic fantasy musketeer universe.


As with the first wave of Dwarf Musketeers (the Musketeers on foot) the new mounted dwarfs come as multi part figures with an extensive selection of hands, weapons and head options.

The Mounted Dwarf Musketeers includes four different ponies with exceptional personality. These ponies were originally sculpted by John Pickford for White Knight Miniatures and his Renaissance Dwarf light cavalry range and are now, with WKs kind permission, used for the Dwarf Musketeers as well.

All the miniatures have been sculpted and mastered. Therefore, all the many choices can be seen on the campaign page - but here are some samples of the wonderful builds we can do, when the campaign is successfully funded: 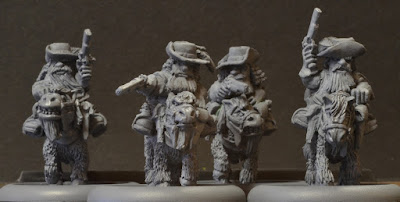 And I must say they all looks stunning. Just look at the Four Musketeers down here all painted (pretty sure it done by Terry Matheny of Sword and Palette):

Now, who wouldn't like such a unit to hunt down Lord Buckingham's spies or the Cardinal’s Guard - or maybe even the Cardinal himself? For let us hope this goes all the way. Because one of the many wonderful stretched goals are just a mounted version of the Cardinal. 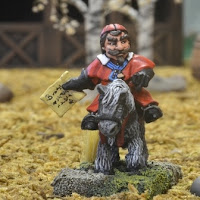 I feel in love with the Cardinal on foot, but this one is even better. Lovely, lovely sculpt.

To find out all about the Kickstarter Campaign - just click this banner down here: