For the last five years (or so) the Oldhammer community have met up at an annual "Bring Out Your Lead (BOYL)" event in Newark. The event is hosted by the wonderful people at Wargames Foundry.

Apart of being a day of friendship, fun and gaming with old lead it's also a gathering of great knowledge and history. Though, the focal point of the event is around the Citadel Miniatures' golden ages (the eighties and early nineties) the hosts (the Ansell Family) also have time and energy to talk and share information about their historical ranges  but also their "New-Age" fantasy ranges including the John Pickford-years. As an example the beautiful Pig-Faced Sci-Fi Orks (Sporks) was shown off at the 2015 - as blogged about here.

As much as I would like to go myself my weak health simply don't allow me a weekend in Newark, unfortunately. So, when the optimal ain't possible, what's the second best thing to do? Well, sending a friend to town for you, I guess.
Luckily, I have such a friend, a dear friend who is also passionate about collecting and painting miniatures, Mr. David Wood of the "Dear Tony Blair"-blog - and Dave volunteered being my eyes and ears (and later wallet) in Newark. Thank you, David. I'm very grateful and I'm very happy that you'd allow me using the information and documentation provided on the day. Thank you very much.

So, the next few updates here on the blog will be about what came out of this year's BOYL - including the huge pile of new Pickford pieces I've succeeded finding with the help of David and a few other friends at the event.

But first thing, first - as it's no real event without an event-only miniature, right? So this is Olivia: 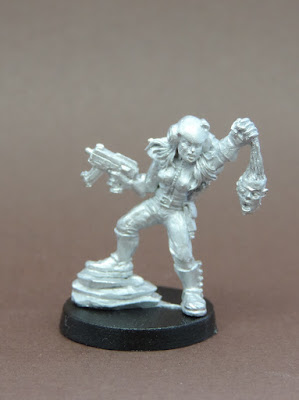 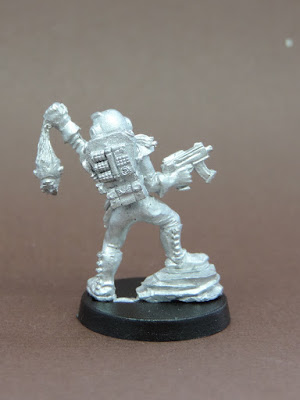 She's a commemorative figure made for the event. The miniature picture a female imperial guard and is based on original 40K Rogue Trader artwork (seen down here below) 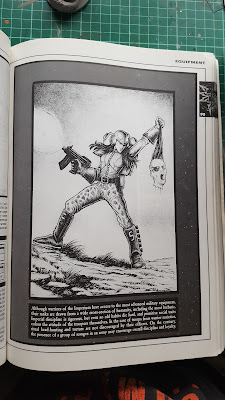 She is sculpted by John Pickford and was cast by Foundry for the attendees at BOYL 2017. Luckily, a kind person gave up their copy so I could have her. Ain't she cute?


But that's not the only event-only Pickford gem I've been given. At BOYL Axiom (@Magpie and Old Lead) ran a little Grox herding game. A Grox is an alien creature out of the 40K Rogue Trader lore. It's described as a large reptilian creature, but like any larger reptiles, it start out small. So, as a little participation-token, Axiom have had John making this wonderful little Grox coming out of it's egg - and a friendly soul have kindly donated an unclaimed copy to my cause. 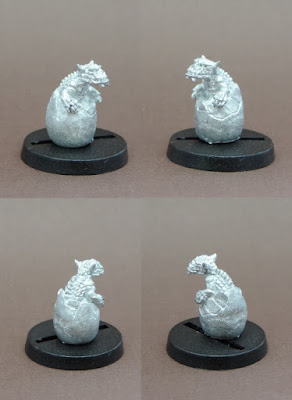 With that out of the way - back to the history part and lets talk about the Pickford/Foundry years because a mystery got solved - and finally, the 3 variant heads for the (yet unreleased) greater demon have been found and have now been showed off.

Back in 2007/2008 John did a small range of Demons for the Wargames Foundry Fantasy range. For a long time they where unreleased and the only proof of their existences where a painted picture of Aquizalor Slayer of Souls in Kevin Dallimore's Painting and Modelling Guide Master Class from 2010. However, in 2012 Foundry finally released them - and they where announced in a newsletter with holded this ad: 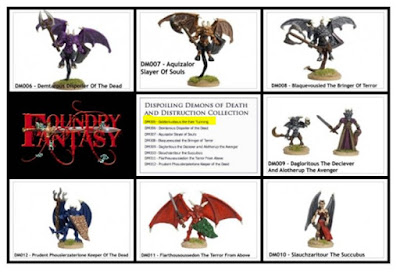 The trained eye will here see that the "Demons of Death and Destruction Collection" where listed as 8 packs DM005-DM012 - but this screen shot might help:

I immediately ordered a set but to my surprise it came with just the codes DM006-DM012. When approaching Foundry they started looking for the DM005 - Golztariusbous The Ever Turning, but came back with a rather surprising message, that there was no record of a Golztariusbous and no miniature with such a code (DM005) had been made nor mastered - and the demon disappeared from the store again.

I was a bit disappointed, as the price of $20 were indicating a rather larger demon, as it was almost double of the price of each of the other 7 packs.

But Golztariusbous The Ever Turning has now been found, I think - both Marcus Ansell and John has confirmed that the guy you see down here (in this recently made mould) is very well my missing code. Although, John have aslo replied that he has a suspicion that a medium sized Demon where made, too. Mystery solved? or am I on to another mystery.


And the wonderful people at Foundry have kindly sent me the miniature that was missing from my original order back in 2012 - and here he is. The long-lost brother 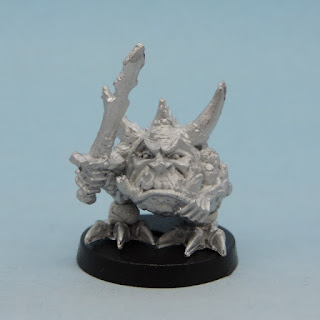 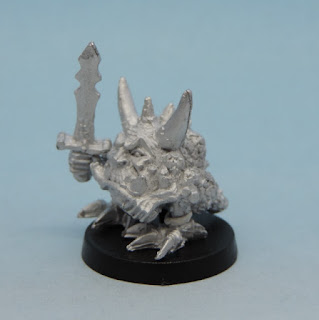 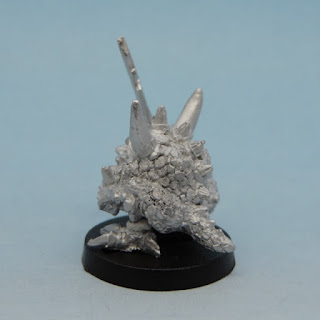 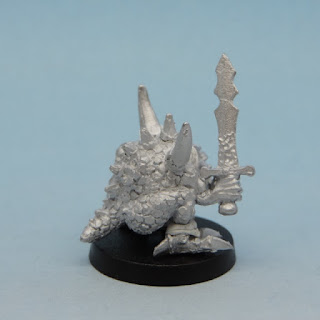 Not as big as price might have indicate, but how do you price a miniature you haven't seen :) And very happy finally getting this little creature.

You can find the Foundry Demon range (made by Kev Adams and John Pickford) here: https://www.castingroomminiatures.com/collections/demons

For this range of Demons a huge beast was also made - probably 6" tall and an as huge wingspan. Marcus and Brian Ansell have kindly shade photos of a finished and painted version of it (one of a very few successful master casts, I've been told) previously but at BOYL 2017 it was even out of the cabinet. Again, David proved a true friend and captured this "moment in time" with his camera.


Nothing here we haven't really seen before, but still a magnificent beast - but the Maria Ansell brought out these:


All three variant heads the demon was sculpted with. Hopefully this means, that the demon can get an actual release. I'd do anything retaining a copy of this beauty (almost).


This ends my first post about BOYL 2017 and my BOYL-haul - but over the next couple of updates I'll make a coverage of most of these items here:


So you can be looking forward seeing updates about Pig-faced Orcs, Architectural detailing, Alpine dwarfs and more. Till then, take care