Collecting John Pickford: I am a Giant

.... "Stand up on my shoulders, tell me what you see.... 'Cause I am a giant, uuh!.. We'll be breaking boulders, underneath our feet ... I am, I am, I am, I am, I am, I am a giant" ..... - Okay, I shall stop the singing, now 😁
The Old School Miniatures Company (OS Miniatures) is back with yet another Kickstarter. Again, it's for the release of a new Pickford sculpt (well, it's actually 3 new sculpts).
Previously we've seen them Kickstart a Daemon Cannon, Alpine Dwafs, the Chaos Dwarf Baggage Train and a lot of Pickford Shields. But this fifth Pickford Kickstarter is "gigantic" cause its all about Giants :) Proper old school Giants that actually fits your gaming table. These giants are the size of old Citadel C28 giants - so something like 2-2½" tall. 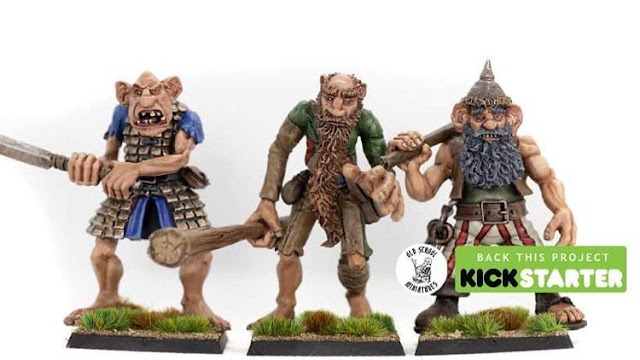 As with the Daemon Cannon and the Baggage Train this giant-project came to life in collaboration with the Bottom's Up Facebook group, who helped financing the commissioning of John by selling "tickets" in return of influence and early access to master casts. The full set includes the above pictured 3 different bodies and a total of 6 different heads (of which 3 are shown here, as well. You'll find all about the giants here: https://collectingjohnpickford.fandom.com/wiki/Bottoms_up#Project_3_-_Giants
The giants are now ready for a full blown production release. And again, OSM has chosen using Kickstarter for this. The Kickstarter went live on 10th March 2021, and on day 1 it has smashed two starched goals expanding the range even further.
First stretched goal was a another Giant, but this one is a big one as it's a 4" tall multi part metal giant (Think Marauder Miniatures MB7 giant sized). And today, Jamie posted an update showing us this awesome conceptual sketch of what to expect. The art piece is done by the creative genius Mafu Street

The second reached goal is a conversion of one of the 3 initially giant bodies turning it into a two-headed giant/Ettin - this will allow you use more of the 6 initial heads.
But more goals to be reached - so check out the "Fe Fi Fo Fum I smell the blood of a little dwarf" - Kickstarter here: https://www.kickstarter.com/projects/osminis/fe-fi-fo-fum-i-smell-the-blood-of-a-little-dwarf
Posted by CLAM at 1:54 PM