First off, a big welcome to Phil Hynes and 'rampant_goat'. Glad to have you here and I hope you'll enjoy your stay - and find something you like - not many zombies, though ;-) And then again ... I do have some Paul Muller Zombies from Heresy ... hmm! - a new painting project, perhaps ..??

So a new year has started, and things are back to normal. So, there has actually been time to get something done. Played with a few plastic kits, too! My son is now 8 years old - and has a growing interest for wargaming. GW 40K,though - and more precisely Orks. We build a Deff Dreed together - and after that we also did turn a Skaven Doomwheel into something Orkish. Can't hardly blame him. Been there myself - but hopefully he will mature - like Dad did :-)

Back on topic and back to today's update which is a mix of things I've done within the last few weeks.

First thing I want to show off is one of the awesome Sea Demon's Paul Muller did for Andrew Coleman @ Four A Miniatures. The Sea Demons are such wonderful sculpts. Paul did a great job sculpting them and he is one of the best - when it comes to creepy/weird/evil/cruel stuff.

Paul has done four Sea Demon for Andy (3 Warriors and a Sea Hag). All showed at the Frother's Unite Forum - but only two off them are up in the store, for now. Nagged Andy a bit, and he was so kind to let me have all 4 - plus a 5th Paul Muller Sculpt called a Piranahboy - not sure if he is an official part of the Sea Demon series, but the name surely indicates that. All the other 4 are now primed white, and will probably show up here in the weeks to come.Here is the first one:

Next, we have another Grenadier Demon. Some might remember that I entered a Grenadier Demon into the 'Paint a Classic' @ Miniature Heroes - but I've also painted a second one - as a test piece to improve  highlighting reds.

So, first we have the MH 'Paint a Classic'-entry and then the new 'blood demon': 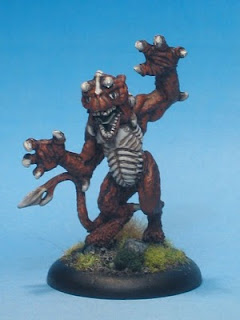 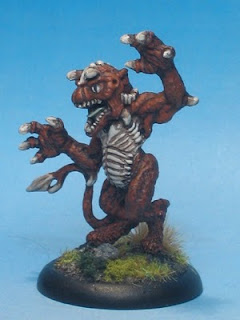 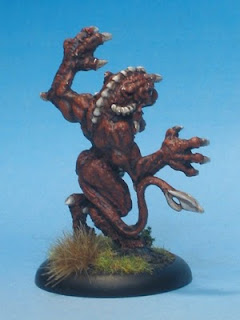 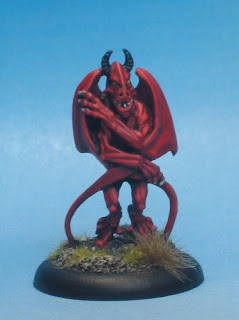 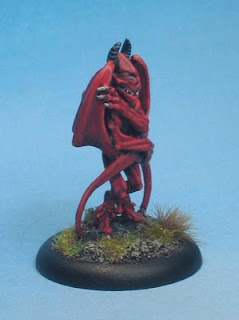 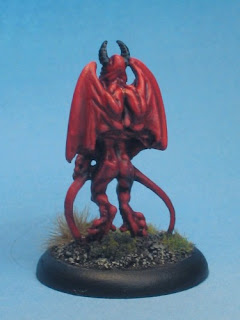 Last, I want to show you my entry for the newly founded Otherworld Miniaturs Forums Painting Challenge . Have had these miniature standing on my desk primed and ready for painting for quite some time, now. Been wanting to paint them for a long time - but always got distracted and did something else. But now was the perfect time - and rather speed painted them too. Took me about 4-5 hours to do - and think I came up with a rather decent result. So here they are - my two new Otherworld babies: 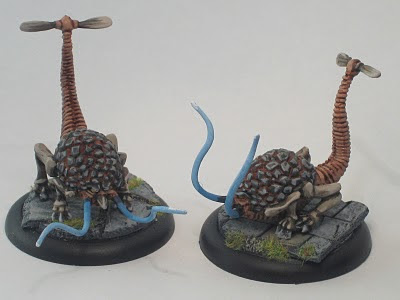 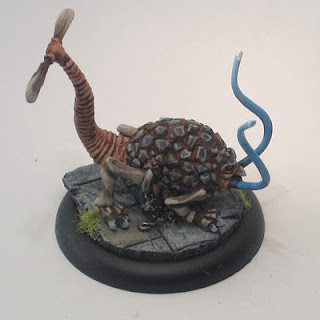 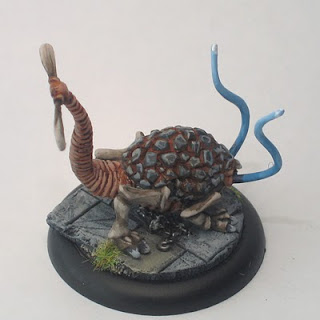 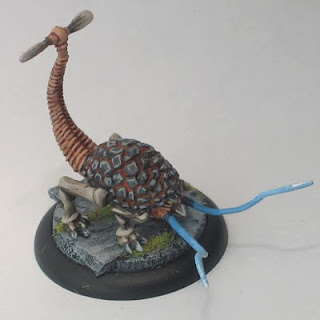 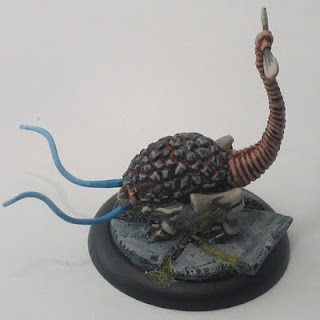 The Rust Monsters are another John Pickford creation. John has done an awesome job on these metal eating creatures. They are like a 3D version of the artwork from the 1st ed TSR Monster Manual. These here, from Otherworld are very close to those Citadel did in their ADD range back in 1986 - but are much bigger and have a lot more details added - so if you are into Original AD&D Miniatures these two Otherworld babies are a 'must'.

And speaking of size. They are based on a 40mm display base (bevelled base). The inner base itself is a Post Apocalypse resin "topper" base from Ian Brumby's company: Fenris Games
Posted by CLAM at 1:30 PM