27th August 1982, 3 days after my 11th birthday, a innocent little children's book was first published in the UK. A book, that at first glance, might have seem "one of a kind" and strange to many. And not many would have thought that this little book, the first in a series of 59, would soon become a publishing phenomenon - and how it would form and shape a hole generation of kids, there imagination and joy for fantasy gaming.
I speak of course of Ian Livingstone and Steve Jackson's: The Warlock of Firetop Mountain and their Fighting Fantasy-series published by Puffin Books.

I'd be laying if I said I was first in line to pick up this book. Being an 11 year old danish kid, I had just started talking english lessons in school, and was just capable of saying: "My name is ..." and trying hard to learn the verb: "To Be". I remember it being quite a struggle actually. All the new sounds and tongue-twisters was quite hard learning, and the difference in grammar was significant. Back then, the international (british/american) exposure on a danish kid from the country side was .... "insignificant". Nothing like today's kids. It's now harder learning them to speak proper danish, that english, I'm afraid :)

So, it would be another 2 or 3 years before I actually got introduced to Sword and Sorcery. The danish publisher Borgen didn't name the series Fighting Fantasy, but had the name change into: Sværd og Trolddom (meaning "Sword and Sorcery") - and for many years I actually thought that it was the original title of the series.

Now why this rambling about Sword and Sorcery? Well first, like for so many other fantasy gamer's, collector's and miniature painter's, the Fighting Fantasy book series awoke a deep interest for fantasy reading, gaming and role-playing. That happened to me as well and I'm pretty sure, that if I hadn't been introduced to these gamebook in my early years - fantasy miniatures and fantasy gaming would probably never had become an interest of mine - and I've would probably have kept on building and painting Spitfire's and Messerschmitt's.
Over the years, I'd always put blame on Dungeons & Dragons for my geekiness - but now that I'm really think of it Fighting Fantasy is probably as much to blame.

Secondly, I might have thought that I'd put Fighting Fantasy behind me, but "suddenly" an old interest has awaken. Mainly due to two events.

First, a wonderful book called "You are the Hero, A history of Fighting Fantasy Gamebooks" written by author Jonathan Green - which landed on my desk back in September. 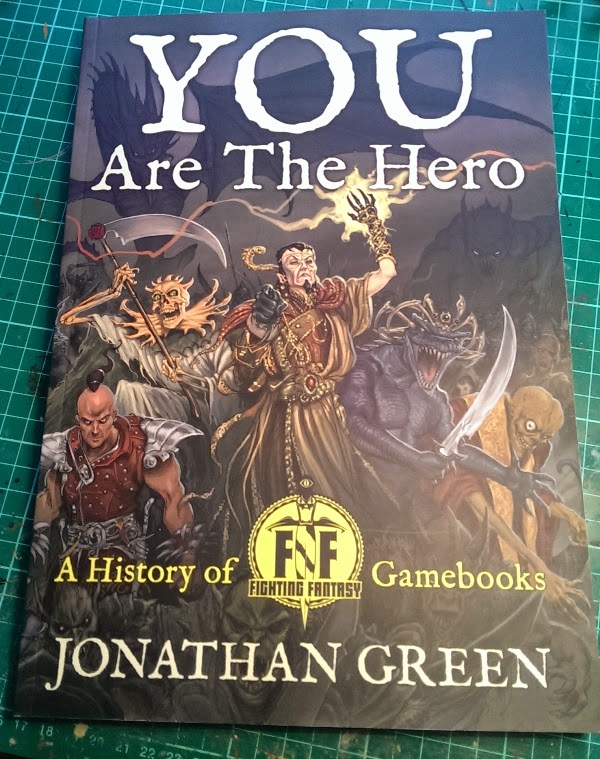 This book was brought to life by a successful Kickstarter back in late 2012 celebrating the 30 years of Fighting Fantasy.
I have to admit, thought - that I totally missed out on the Kickstarter campaign. As said, Fighting Fantasy and game-books haven't really been a part of my hobby the past 20+ years. Though, I did pick up Ian Livingstone's thirtieth anniversary book: "Blood of the Zombies" for the iPad - most out of nostalgia as I actually never played it through (yeah, yeah! I admit it, I didn't survive) - but Fighting Fantasy would again fade into oblivion.
Just till I heard of Jonathan's books on Facebook (of all places :)) - and I was delighted finding out, that the book had reached its goals and found its audience. So when it went up for public sale, I got first in line  - keen to join all the brave sons and daughters of Allansia that made this book possible.

The book gives you a detailed insight to the history behind the Fighting Fantasy (FF) series and gives all the details and little stories that goes behind every single book and the FF-spin-offs. The book is written with such love and passion. Jonathan is such a great story-teller (having lots of books under his belt) and with contributions from the two founders Ian Livingstone and Steve Jackson, most other co-authors, publishers, editors and leading artists added the book is such a pleasure reading.
But that's not all. The books is packed full of exceptional art work and wonderful reprints of book covers, internal illustrations and maps made by fantasy art legends. Many of the original covers (and covers from the side-kicks, RPGs, novels and magazines) are printed in a full colour A4 format. The book also including brand new art by iconic Iain McCaig, Russ Nicholson and Matin McKenna.

These cover re-prints are a pure eye candy - here's a glimpse of what treasures you can find inside this tomb:


This book should be laying on every fantasy miniatures gamer's or painter's coffee-table, even with those without any actually interest in Fighting Fantasy - cause this book is a piece of art and it's worth every penny.


The second reason for this new/awoken interest is a more personal one. My wife and I are trying hard stimulating and motivate our oldest into do more reading, but as he finds that anything without a LED-display and an on/off switch, is a time-waster and old fashion, and it hadn't been easy for us making him think otherwise.
During a summer-clean-out I then came cross my Fighting Fantasy collection including a few of my danish edition's and out of nostalgia I handed them over to him - as I hoped, they would have awaken his interest for reading (and perhaps fantasy gaming), like it awoke me nearly 30 years ago.


However, it didn't had the immediate effect I was hoping for, but then our 7 years old spotted them, and he was "sold" just by the looks of the covers.

So, he and I have put our daily dose of Captain Underpants aside, and have completed: The Warlock of Firetop Mountain, Citadel of Chaos and Forest of Doom and are now deep within Port Blacksand (reading The City of Thieves) - half an hour each night - just before bedtime. Haven't made the job easier (all that adrenaline kicking around) but it's been joyful. He cheats as hell, but haven't well all been there, but with Forest of Doom, he already gave up the standard Skill 12, he gave himself and played it with a regular score of just 9.
And guess who sneaks into the room now and join us? :) So, it might not have had an immediately appeal, but the stories still have their appeal - old fashion or not. And the other night he ran of with Starship Traveller, a few dice and a pencil - milestone #1 reached :)

However, it also has a downside, as it also awoke the collector gene in me. The danish publisher "only" translated and released 24 of the books - ending the series be releasing: Heltenes Slagmark (Armies of Death). Back then I borrow most of them from the public library, but also collected a few - but around 1989-90 I started picking up the original english ones.
So, I got most books from Firetop Mountain to Creatures of Havoc (but left out most of the Sci-Fi ones) - after that I lost interest/found other interests, I guess. Looking at it now, it seems I stopped reading FF when Ian and Steve stopped actually writing them. So, what did I miss out on (if I missed out on anything, that is)? Which books, should I start looking for? What adventure is your favorite?  I know I need go finding Steve's original Sorcery! books (if not for the stories then for the Blanche art) and also Jonathan's contributions - but what else should I look out for? Don't say "all", please - not "all" ;-)