I won't bore you with details regarding my absent from here, but only fair to add a few words, though. Those that have been following me on here, over the years, will know that I suffer from a bad back. In December it's became real bad again ending up by having yet another surgical operation, but after 3 weeks of recovering, it's time for a come back :)

Haven't been able to sit by the painting table yet, but I have a few things planned for December 2014 that I'll try and post the coming weeks - also have some interesting things to share regarding Collecting John Pickford.

First, I'd like to pick up from where I left you all, in December. So, today's post will be another post about re-discovering the Fighting Fantasy genre - but this time from a miniatures point-of-view.

The magazine was never distributed here in Denmark and I first learn about after it ceased publication in 1986 - but in the following years we succeeded finding rather a few issues.

Each issue of Warlock included a mini-solo adventure using the fighting fantasy rules engine used in the main gamebooks, with some of them expanding into a full adventure books, later on. The magazine also included features like official announcements and GW adds, interviews, a monster bestiary (being the basis for the Out of the Pit-book), maps of the Fighting Fantasy, supplementary illustrations and new art work, competitions and even a miniature figure painting tutorial by Mr. Rick Priestley. And then there where the comics - especially a strip introduced in issue #7.

I am speaking of Derek the Troll, of course.

Derek the Troll was written and illustrated by Lew Stringer and he became one of the most enduring characters of the magazine. He appeared first time in a strip in Issue 7 - and came back in issue 9 and was a regular feature until the end. The much put-upon Derek  even broke out of his strip and started stating his opinion in book reviews and other articles. In issue 13, we even saw him in an short 16-frame "gamebook" strip called: Derek the Troll's 'Orrable Troll-Playing Game, where readers had to take Derek past Trev the Vampire. A strip that has now been reprinted in Johathan Green's "You are the hero". And even more interesting, in You are the Hero you find a brand new strip form Lew's hands, as Jonathan Green commissioned him doing a brand new strip for the book. So would this be Derek's final appearance? Only Lew knows of cause, but he gave this answer on his blog: "No. Now that the character is back I want to keep him around so expect to see him back again, somewhere, some day. Probably not for a few months at least as I'm busy on other comic strips, but he will return!". So, fans should definitely keep an eye out for news regarding Lew Stringer and his works ;-)

Now, what has that to do with miniatures painting, you might ask? "A lot", the answer is :)

I 2013, talented George Fairlamb (aka redshadows on various forums) sculpted Derek, as a tribute to the old comic character - and with the help from David "the Dozing Dragon" Wood (of internet fame and author of the fantastic Dear Tony Blair blog) the sculpt has been mastered - and I have been given the rare opportunity of painting one of these super rare copies. 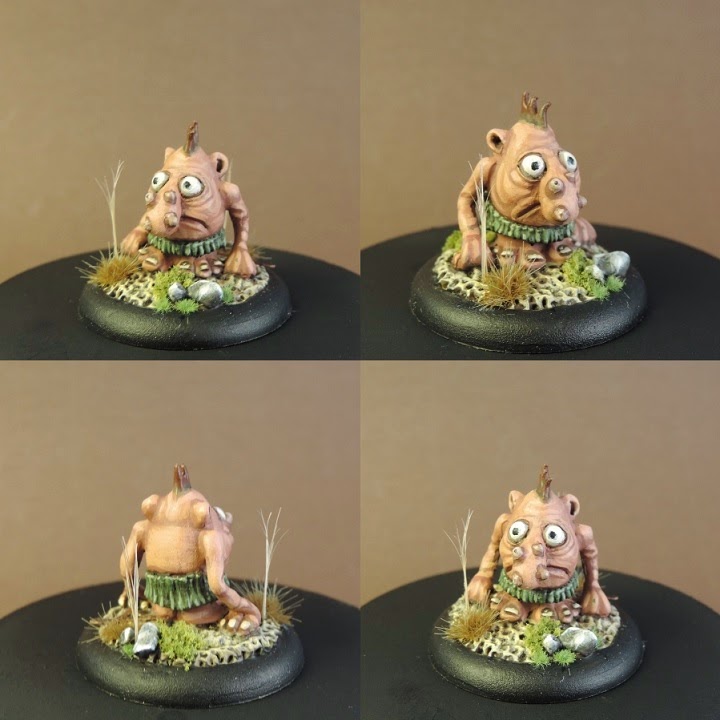