Sorry about the title, but it was so obvious :)

I've been painting the Space Pirate/Bounty Hunter Sjoerd Trowee did for me, or actually did back in 2014 for the Froth Eisley sculpting competition (the Forthers United (FU UK!) Sculpting Competition), but later offered on to me. The miniature were mastered last year, but added to an empty slot in the production mould I've just have had made.

It's a nice, but also very clean miniature by Sjoerd and I really found him hard painting. Not sure if it's the "cleanness" or just that I'm feeling rather rusty when it comes to painting Sci-Fi miniatures. And using bright colours too, didn't help at all. But I've added some dirt and battle damage to it covering up the most dodgy paintings and obvious mistakes - and a nice busy base, to steal a bit of focus, always helps :) 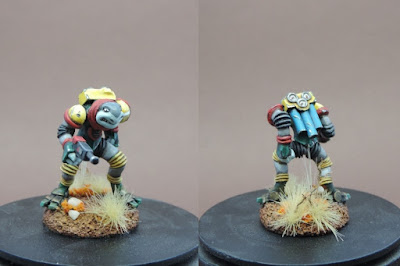 Ayone no of the faith of the other Froth Eisley entries? Were any of the other lovely entries ever cast up and made commercially available? I'd definitely like to here about it, if so.

Till next time, take care.