I'm still unable to paint anything due to the two operations earlier this month. So, today's post is plugs for two people I believe deserves all the publicity they can get.

White Knight's (not so) Secret Dwarf Project
First, a plug for White Knight's Project creating a Renaissance themed Dwarf army. People, that have looked in the John Pickford Collection Guide or frequent forums like Frothers and Lead-Adventures would know what Sebastian is up to. But for those who don't, I can tell that he has commissioned John Pickford to do him a Renaissance themed dwarf army inspired by the old Marauder Miniature Dwarfs - and John has done a spectacular job for him.

From the very start it's been WKs personal project, and not a commercial venture, but he is now offering people a chance of getting some of these awesome sculpts for themselves. So yesterday, he announced the availability of the first set of multipart dwarf infantry.

Here is a small teaser: 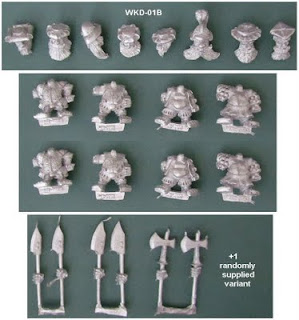 More can be found in his blog. Here you also find details how to get your hands on some of these yourself: WK Miniature Imperium.

Yes, it's true - today - Richard Scott has announced that he will be running an early summer sale. All prices are reduced by 20% - also all the items up for pre-order. So why waste more time, go show him you support at the Otherworld Miniature Store :-)

Go pick up some of the fantastic John Pickford Miniatures or maybe a set of these awesome Duergars (Evil dwarfs) done by Kev Adams:

And before I go, a big welcome to Blue in VT/Chris - a fellow Marauder Miniatures Chaos Dwarf-o-holic and a very dear friend of mine. A guy that I've come to know of at Chaos Dwarf Online. And I can only suggest you people to go visiting his awesome painting blog or have walk through the 10 rounds of Lead Painter's League 2011 at the Lead Adventure Forum - here you'll find stuff like Marauder Miniatures Ogres and Dwarfs or even see him go Sci-Fi with his Round 10 Star Wars.
Posted by CLAM at 4:34 PM